Today’s tour was going to be a great one.  We had to bring our passports with us because we had to show it to the military before entering the DMZ. I’ve learned about the Demilitarized Zone (DMZ) in school, and I have always wanted to see it.  We began our scenic drive to Seoul from the pier along Unification Road, which is the main highway connecting Seoul and Panmunjom.  Along the way, we saw Freedom Bridge which is the only bridge that crosses the Injin River connecting North and South Korea.  For thousands of North Koreans, this narrow wooden bridge was the path to freedom at the conclusion of the Korean War.  Upon arrival at the DMZ, we saw that it was heavily guarded by the American and South Korean military.

Created by the Korean Armistice Agreements signed in July 1953, the DMZ is a 155 mile long, 2.5-mile wide military demarcation line (MDL) with a 1.2-mile wide demilitarized zone on each side of it.  After the military had briefed us, we took a guided tour of the museum.  After the museum, we continued to the third tunnel.  This 5,364-foot long tunnel is located about 240 feet underground and is over six feet high and wide.

This tunnel was designed for a surprise attack on Seoul, the tunnel crosses the demarcation line into South Korea, and is capable of moving 30,000 battle equipped foot soldiers per hour.  The tunnel was quite impressive.  They had painted black spots on the walls so they could say they were digging for coal.

The last stop on tour was the Dora Observatory for a panoramic cross-border view of North Korea propaganda village.  We were told not to take any pictures of North Korea beyond this yellow line that waspainted on the ground.  If you did they would grab your camera away.  It was a pretty serious thing.

Follow us on our journey the next destination is Shanghai, China. 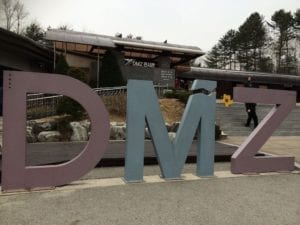 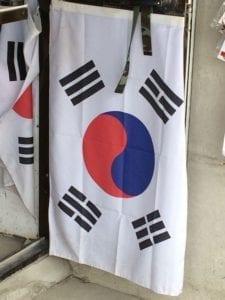 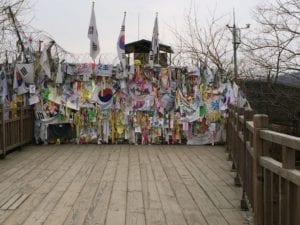